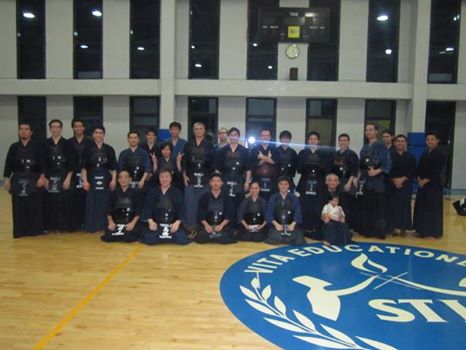 The Godo Keiko Kai was established in early 2013 as a venue for any and all kendoka based in Metro Manila to practice in regardless of dojo affiliation. Organized by Takahashi-Sensei and Inoue-San, it opened the opportunity for people from both IGA Ken and Manila Kendo Club to regularly practice with each other.

It was decided after a few months of operation to hold a tournament, where teams would participate in a series of round-robin matches in order to determine the eventual top four seeds who would then compete in the finals for the championship. The inaugural tournament started on May of 2013 and finished December of the same year, with Team FHM of MKC taking 1st prize.

The second year of the Godo Keiko Kai Shiai saw a total of eight 3-person teams from both clubs competing. The round robin elimination matches were held every last Monday of the month from May to November of this year. The results of the eliminations were posted in a previous article about it.

The quarterfinal match was between Gravity Fox and Wallaby.

Senpo match pitted Rafael Javier (Gravity Fox) and Andre Brillantes (Wallaby).  Javier took control of the match early with a well-timed de-kote. Brillantes fought hard to win back the point, but a missed kote attempt opened men for Javier, winning him the match. Gravity Fox led at this point, 1-0.

Chuken match was between Joshua Espiritu (Gravity Fox) and Wally Chamsay (Wallaby). Both players started cautiously, trying to get the feel of their opponent’s timing. First point was from a de-kote by Chamsay, and he followed it up with a kote-nuki-men. Team score was now tied at 1-1.

Taisho match was between Alain Duminy (Gravity Fox) and Lorenz Duka (Wallaby). As the fate of both teams rested on their shoulders, both kendoka exchanged a flurry of blows in an attempt to win. Finally, near the end of regulation Duka was able to score a men-uchi after a missed attack by Duminy. Duka won the match and sent the Wallabies to the semifinals against the Lady & the Tramps. Team Gravity Fox had to settle for 4th place.

The senpo match was between Dane Pio de Roda (Lady & the Tramps) and Brillantes. Pio de Roda took early control of the match with a de-kote. Brillantes fought back and managed to score a de-kote of his own well into the 2nd minute. The match ended with a hikiwake result.

The taisho match was between Kristopher Inting (Lady & the Tramps) and Duka. Inting took the first point with a men-uchi on Duka early in the match. He followed up with another men-uchi moments later, thus securing the win for himself and his team. Team Wallaby finished in 3rd place, while the Lady and the Tramps were now going to meet Team FHM in the finals!

The senpo match was between Pio de Roda and Ronald Villaroya (FHM). Both players started aggressively, trying to out speed each other. Villaroya managed to score men-uchi after the first minute, and kept that lead until the end of the match. FHM was now leading 1-0.

The chuken match was between Reyes and Allan Zapata (FHM). Zapata managed to score the first ippon on an unlikely men-uchi against his much taller opponent. Reyes fought back and got an equalizer men-uchi. The match ended on a hikiwake.

The taisho match was between Inting and Emerson Sychingiok (FHM). The match was hard fought, but Sychingiok made sure of his team’s win by scoring two successive de-kote on Inting. Team Lady & the Tramps had to settle for 2nd place, which Team FHM took the championship for the 2nd year in a row.

The event finished with the awarding ceremony. In addition to having the honor of getting 1st and 2nd place in the shiai, Teams FHM and Lady & the Tramps also received shinai as their reward for fighting hard.

Duka with his prize.

Javier with his prize.

In the end, this was a good cap to a fun and competitive tournament. All the participants are certainly looking forward to the 3rd installment starting this May 2015. See you all then!