Notice to the reader: Though written without the intent of spoiling readers who have yet to watch the movie, this review might discuss some scenes in passing that may not be found in the film’s trailers.

Titular character Himura Kenshin smiled at the camera as the movie faded to black. Slowly, each member of the audience started clapping until everyone ended up welcoming the closing movie credits with a thunderous applause.

Such collective salute has been given to the movie adaptation of iconic anime/manga Rurouni Kenshin in most of its screening in the Metro that one may ask what makes it special.

Kotaku, for one, called it “near perfect”, and that’s the simplest way to put it.

Rurouni Kenshin, after all, has exerted a level of faithfulness to the original material that the hand-drawn characters from paper and television have believably come to life, bringing the two-dimensional imagination of its characters and their quirks into the real-world.

For the first time in recent Philippine cinema history, a Japanese movie has made it to commercial theaters. Originally on limited release, the film’s strong reception has led mall giant SM to extend its offering of the movie after it reportedly earned around $300,000 in its first week.

This number barely comes as a surprise, however, as it only proves that Rurouni Kenshin has indeed mesmerized an entire generation.

Rurouni Kenshin succeeds in its live-action version in almost all aspects:

Fight scenes are well rehearsed and fast, emphasizing the extraordinary skill that the fighters possess. Slow-motion was used sparingly, only to focus and certain aspects of the match, allowing the scene to flow as it usually (or unusually) would in the anime.

The movie also noticeably doesn’t scrimp on blood: it flows when it should.

Although someone surviving a double-bokken strike to the neck might be hard to believe, it is safe to assume that anime physics is in effect in the movie.

The characters looked like they came straight from the anime, especially Himura Kenshin actor Takeru Sato, whose Kamen Rider Den-O fame has given him the rightful appeal for playing action roles. Sanosuke Sagara genuinely had the street fighter vibe, and Saitou Hajime’s still-perfect-in-the-rain hair makes one ask about his gel brand. Yahiko, however, can be quite forgettable

Businessman Kanryu looked as corrupt as he was in the manga, while Jine’h looked better than his malnourished yet just-as-sinister animated self.

There is an ongoing debate though about Kamiya Kaoru/Takei Emi and Takani Megumi/Aoi Yuu: movie Kaoru was believed to be too pretty or too feminine and that movie Megumi seemingly lacked the bombshell appeal that she should have had in the anime/manga (this writer thinks they’re both cute, and that’s what’s important). 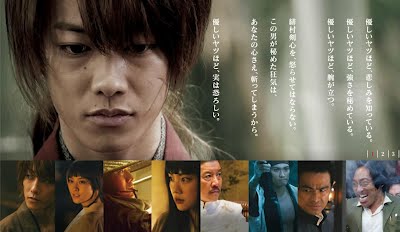 Sticking to the first part of the anime/manga, familiar fans will be surprised with certain additions and the lack of particular characters, but the reason behind this move might be answered in the movie’s sequel, which has been reportedly green lit for production. In general, squeezing multiple long arcs in 2 hours and executing it properly is utterly impressive.

Learning from the dojo

While the movie starts with an impressive bloodbath (it may be uncommon to put those two words together but that’s how the scene really feels), the viewer is also introduced to the general idea and culture that exists in modern martial arts through the ideals of Kamiya Kaoru’s inherited dojo, which is “the sword gives life.”

Without giving out too much, the dojo in the movie also shows a subtle lesson on etiquette, and how it shows in people who have taken the way of the sword close to their heart, and to those who have thrown it away. So aside from the anticipated sword-clashing, watch out for this scene as well.

Overall, Rurouni Kenshin was an old childhood friend that, despite growing up, still acted the same way as the last time you met.

As for viewers who have never met Kenshin before, he’s a humble and selfless character that effortlessly mesmerizes with his skill and control, and for sticking for his principle no matter what the cost.

In simpler terms, Rurouni Kenshin is a cool movie you shouldn’t miss. It’s properly done and exudes of the terrific quality known of all types of Japanese production, film included.

At the end of two hours, Kamiya Kaoru gladly welcomes Himura Kenshin at the Kamiya Kasshin dojo, who happily declares that he’s home.

Everyone who grew up watching Rurouni Kenshin would feel just like that.

——————————————————————————————
About the author: Known as “Ronin” by the members of IGA-Ken, he certainly lives up to his name as you’re not quite sure when he’ll show up for practice! He is also (in)famous for developing a special waza, the “Magnum TornaDo”. He is still trying to figure out how to kiai that properly as he strikes. The first official photographer of IGA-Ken, many of the club’s early good pictures are credited to him. This article is his winning entry to the movie review contest that the club held.